Through Skau Reipurth’s Next Generation Award we acknowledge young and dedicated persons who early in their career have excelled in their area of expertise and who have created remarkable results in an early age because of their high professional standards, willpower and level of ambition.

Skau Reipurth’s Next Generation Award is given to persons across industries – e.g. to a person, a team or an association. The criterion is that the award recipient is in the beginning of his og hers career and reflects professional standards, dedication and results. Always.

Below, you will find the persons who have been given the award.

In 2022, Elisabeth Holmegaard Nielsen has been given Skau Reipurth’s Next Generation Award (DKK 25,000) as an acknowledgement of her great musical talent, hard work and passion for playing the piano.

On Friday 25 November 2022 Elisabeth was presented with the Next Generation Award at PH Pianos in Bredgade in Copenhagen K in the presence of Skau Reipurth.

Playing the piano has always been my dream. My mother emigrated from Ukraine together with a friend, who is a piano teacher. So this may be what sparked my interest. From childhood, I was deeply fascinated by the huge instrument.

Elisabeth Holmegaard Nielsen has always loved performing. She began as a ballet child at the Royal Danish Theatre, and at the age of seven she started playing the piano. The piano was to become a lifelong passion, and already at the age of 16 she was admitted to the Royal Danish Academy of Music, where she graduated with full marks.

While studying for her Master’s degree, she participated in international competitions and taught the piano, and thus discipline and proactivity became second nature to her. Subsequently, she studied in Vienna and Verona and has been admitted to the soloist class within new music at Accademia di Pinerolo in Italy.

29-year-old Elisabeth makes a living by playing the piano, primarily classical music, but often combined with modern compositions. She has given concerts in many countries, participated in film projects, released two CDs and has won numerous competitions and awards. She considers it a privilege to be working full-time with her passion.

But she never stops refining her skills – and constantly prioritises giving something back to society.

Elisabeth is a co-founder of the association ”Nielsen Saloner” (the Nielsen Salons). This year, the association has had particular focus on supporting Ukrainian musicians. At the same time, she has a burning ambition to stimulate interest in classical music among the younger generations.

When Elisabeth performs before an audience, it is not to impress the audience, but to convey the unique message of the composer to each individual listener. Music always has a special story to tell, and Elisabeth is committed to communicating that story to the audience. She is inspired by meeting people with a passion, and she is energised by communicating – through music – with people from other countries.

My education never stops, for musicians keep learning all their lives. It is part of our DNA. At the same time, we communicate universally – and, to me, this is the greatest magic of music. 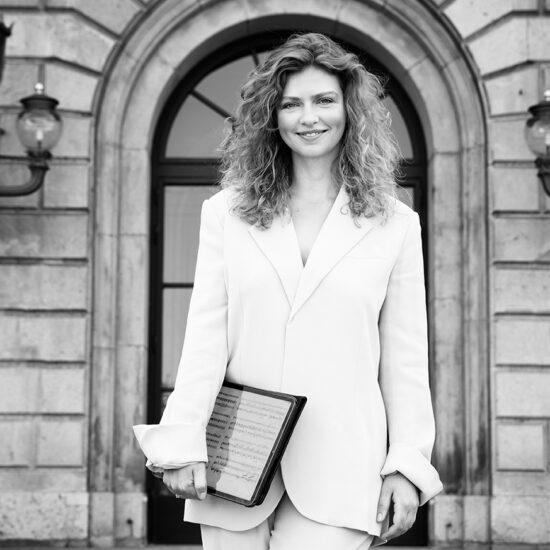 In 2021, the 28-year old writer Molly Balsby has been given Skau Reipurth’s Next Generation Award (DKK 25,000). The award is an acknowledgement of her talent, dedicated work and passion for writing.

On Friday 26 November 2021, Molly was presented with the Next Generation Award on the Danish castle “Dragsholm Slot”, where everyone at Skau Reipurth participated.

In 2011, Molly Balsby dropped out of high school to pursue her biggest dream.  At the age of 18 she became one of the youngest ever to be admitted to the Danish Academy of Creative Writing. She has since studied history at the University of Copenhagen to achieve a more classic education.

In 2018, Molly published ”Ponyprivilegiet” (the Pony Privilege) – a collection of poems about love, death and small horses. The book is a story about being a young woman in a complex world. In the book Molly deals particularly with the concept of privileges while the pony’s cultural meaning is applied as a metaphor throughout the book.

Currently, Molly is working on a historical novel and she is soon to go on a research tour to the US to finish the book. Meanwhile she teaches at folk high schools and upper secondary schools where she gets energised from inspiring ambitious young people to choose a creative profession.

As a writer Molly seeks not to isolate herself, and she gets professionally inspired by observing and interacting with the world around her.

Molly’s level of ambition manifests itself by a high degree of persistence. You cannot achieve something if you only give it one chance. It requires dedication and hard work to strengthen one’s professional knowledge and achieve results. For this reason, Molly often doubts what she is doing. A doubt that works in her favour. To Molly, complacency is the exact opposite of ambition. And Molly never stops sharpening her own pencil:

I am very result-oriented, and at the same time I believe that it is important to be aware of – and accept – that often it is only a little part of one’s hard work that results in an actual product. As for example a published book. But all the other work helps improving my knowledge and skills and thus it is never wasted.

In 2020, William Bille Meyling has been given Skau Reipurth’s Next Generation Award (DKK 25,000) as an acknowledgement of his talent, hard work and passion for programming. Having a creative mindset, William has already achieved remarkable results. In addition, he is passionate about learning, and he never stops refining his skills.

In 2020, William Bille Meyling has been given Skau Reipurth’s “Next Generation Award” (DKK 25,000) as an acknowledgement of his talent, hard work and passion for programming.

Having a creative mindset, William has already achieved remarkable results. In addition, he is passionate about learning, and he never stops refining his skills.

Programming is like LEGO bricks – I innovate and use my creativity.

The young scientist often participates in computer science camps in Denmark and abroad, and he solves online computer science assignments where he is motivated by transparent results and by working under time pressure.

And only the best results are good enough.

In the summer of 2020, William began studying computer science at the University of Copenhagen. He is passionate about the professional journey and about strengthening and refining his skills, but at the same time he thinks about how his future will turn out. Time will tell whether it will be within the field of research or entrepreneurship, but one thing is clear: William’s dedication pays off as his long-time dream is becoming a reality.

I smile when I wake up in the morning, because I am looking forward to a life where I combine education and work with my biggest hobby. 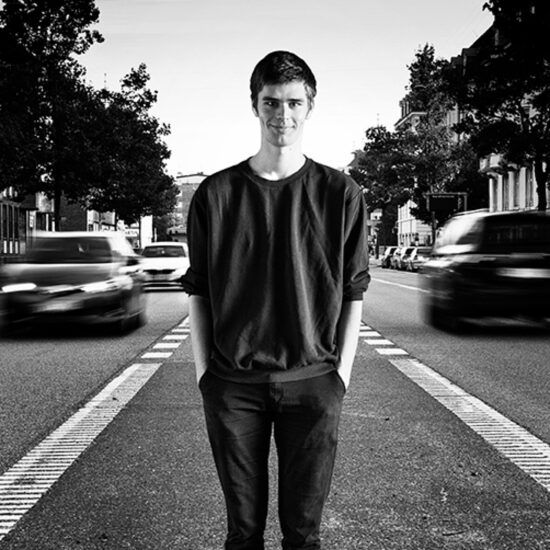 In 2019, the young and ambitious chef Jonas Harboe was given the Next Generation Award (DKK 25,000) as an acknowledgement of his talent, hard work and passion for his job.

On Friday 6 December 2019 Jonas was presented with the Next Generation Award at the office of Skau Reipurth in the presence of the entire firm.

To Jonas Harboe, everything is about food. Recently, the young native of the Danish island of Bornholm qualified as a chef from Restaurant Palægade, and he now works as a chef in Copenhagen. Curiosity and the will to hone his skills characterises Jonas who is often experimenting in the kitchen of his workplace after hours. Being a chef is a constant journey, and Jonas is passionate about all aspects of the restaurant business – from washing and cooking the vegetables to watching the guests enjoy their meal.

Classic craftsmanship is important to Jonas, who is also particularly motivated by combining various cuisines in order to create the very best taste experience. As a part of his professional development, he sold everything he owned, left his friends behind and went to Paris in 2018 where he worked at the Michelin restaurants Copenhague and Neige d’été. A tough and very educational experience.

I always pay attention to detail – and that goes for every dish.

Through the years, Jonas distinguished himself several times, and he won awards such as Oluf Brønnums Fonds Talentpris (2019) and a gold medal from the Copenhagen Hospitality College (2018).

But he is not done refining his skills.

Jonas always carries a notebook with him in which he makes notes when he comes across something that inspires him. It may be a text, a colour, a dish or something that catches his eye when he strolls through the city.

The young chef dreams of opening his own restaurant, and when the time comes he can find inspiration in his notebook. But first, he wants to go abroad again. Having a determined mind, Jonas makes things happen, and thus a position with a two-star Michelin restaurant was awaiting him in New York. However, due to the Covid-19 situation this was postponed.

In 2022, Jonas started as a head chef at restaurant BLOMST in Copenhagen. 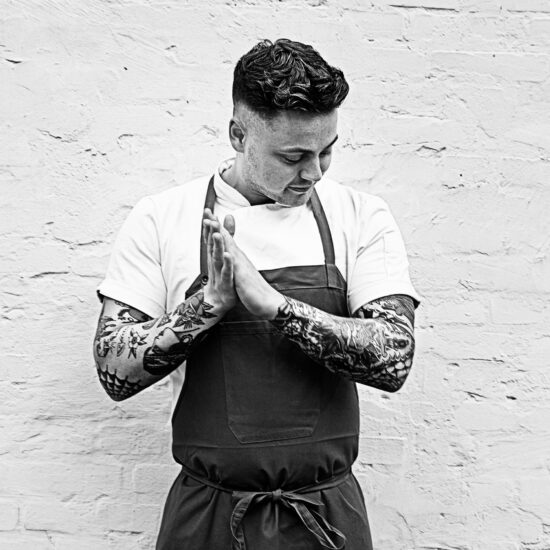